Can Wages from Self-Employment be Included in Work Comp Payments? 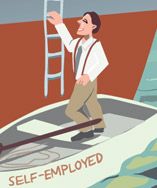 Unfortunately, the law in Arizona is well settled that only concurrent wages from "covered" employment can be included in the calculation of the average monthly wage.  This means that the other employment must be covered under the workers compensation Act to be eligible for inclusion in the average monthly wage.  Since the injured worker didn't carry workers compensation insurance on himself in the self employed job, it would not be considered covered, and was not able to be included in the calculation of his average monthly wage for purposes of workers compensation benefits.  It is unfortunate for him because his industrial injury precludes him from doing even his self employed work now and he will not be compensated for the wages lost from that work as a result of his industrial injury.

The rationale behind this policy is to encourage all workers to carry, or work for employers who carry, workers compensation insurance.